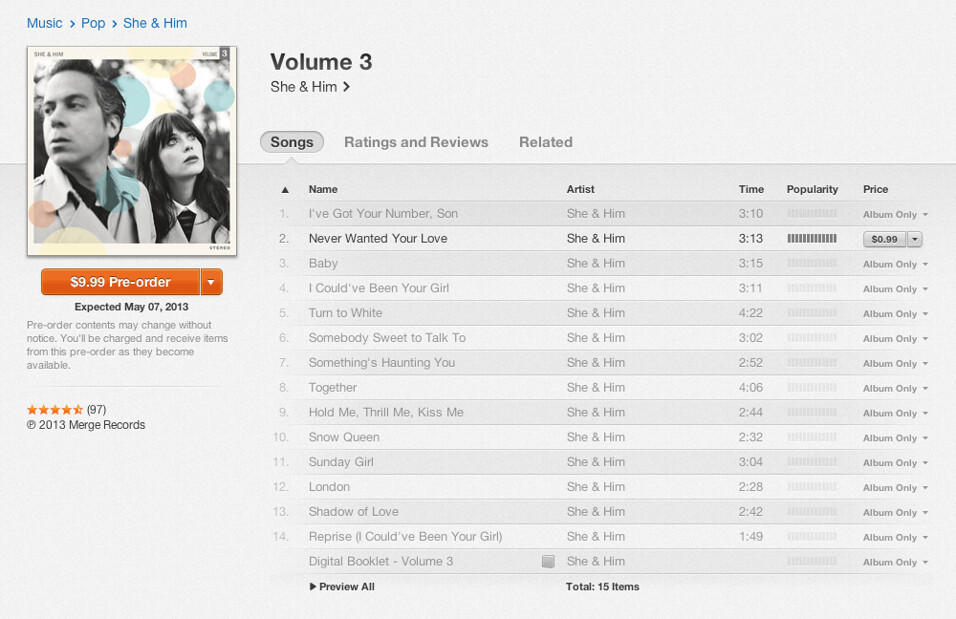 A while back the iTunes Store started offering a feature called “Complete My Album”. If you buy a song or two from an album, you can “complete” the album just by paying the difference. Since a complete album is often cheaper than buying the songs individually, it's a great deal for customers and it encourages them to spend more on music.

Soon after rolling out this feature, they started taking it a step further: you could buy the single from an upcoming album, and then use “Complete My Album” to get the rest of the songs when the full album was released. In other cases you can actually pre-order the entire album, and get one of the songs immediately. This seems like another great idea, and in theory it is.

The problem is, you never actually get a complete album in those cases. What you get is a single of the hit song, and the rest of the album, minus the hit song. What's the difference? Well, you can't even listen to the album properly without editing the metadata for the single—changing the album name, track number, and so on. Often the song itself is actually different: single versions are meant to stand alone, whereas album versions may be subtly tweaked to flow better from one song to the next. In some cases there are more significant differences, like a different mix.

The worst part of all this is when Apple is actually deceitful about it. Take a look at the screenshot above. They're highlighting track 2 of the album Volume 3. So you would think that if you pre-order the album, you'll get that song now and the rest later. But you'll actually get track 1 of Never Wanted Your Love (Single)¹, and you'll never get the album version of the song. (Unless you buy that song again, separately, after you buy the rest of the album.)

Here's the really crazy thing though: this all made some amount of sense back when these features were originally put in place. Buying a song let you download that song once—that was it. But now you can go into your purchases and re-download anything you want. You might think you could get the missing album version of the song that way. Nope: only the single version shows up there. You could download it five hundred times if you like, but not the album version—unless you buy it again.

I imagine a lot of people don't care about this or even notice it. But for those that do—and the artists that put so much work into crafting these albums—it's inconsiderate and disrespectful. It's time to put an end to it.

Updated April 2014: It's hard to say for certain if Apple has completely stopped doing this, but it seems to be improving at the very least. I pre-ordered two different albums this month, and they both had tracks that were available to download immediately. In both cases, they were tracks from the actual album—once the full album was out, I had everything, in order, without having to alter any metadata.

1. I'm assuming. I won't actually be buying this album until it comes out, since I want the whole album. But I have had this same problem happen over and over, most recently with Welcome Oblivion from How To Destroy Angels. ↩
Posted April 17th, 2013 by Mike Piontek
Link to this entry: https://mikepiontek.com/go/8779

Find more in the archive

Hey. This is the personal web log of Mike Piontek. I make software for Mac and iPhone. Maybe you’ve heard of my company Junecloud or my app Deliveries? This site was created using my own Junecode.

Here’s where you can find me in other places: